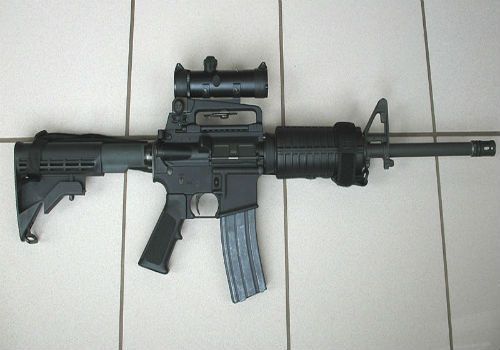 Top 10 Most Powerful Guns in the World

What is a gun?  It is weapon incorporating a metal tube from which bullets, shells, or other missiles are propelled by explosive force, typically making a characteristic loud, sharp noise.  It is also called a firearm.  It was believed that the first firearm was invented in the 12th century in China using a bamboo tube that ignites gunpowder.  Today, there are so many types of firearms.  It can be differentiated by the configuration of a gun.  First is a handgun which is the smallest of all firearms and  the long guns which is longer than handguns.  These are rifles, shotguns and carbines.  Next is its Functions, these are Manual, Semi-automatic, and Automatic.  Manual can be single shot or repeating firearm.  A single shot means it can be fired once the trigger is pulled and reloaded only once. The repeating is fired multiple times loaded with many bullets but that is every reloading of each bullet manually.  A semi-automatic, or self-loading, gun means the gun is automatically loaded as long as the cartridges is inside the weapon.  Automatic firearm is the one that uses magazine.  It continues to shoot as long as it has bullet on it.  Machine guns, Submachine guns, Personal defense weapons, Automatic rifles, Military Style Semi or Full Automatic Rifles are all automatic firearms .  It is widely dependent on the jurisdiction, type of firearm and type of ammunition that determines the legality of the possession and use of firearms.  Let us now breakdown the 10 most powerful guns in the world! 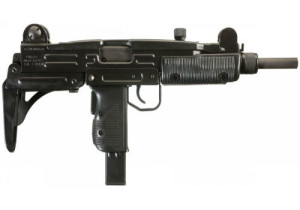 Uzi Submachine Gun is designed in Israel by Uziel Gal, where the name “Uzi” originated, in 1948.  It is one of the first weapons that uses a telescoping bolt design which allows the magazine to be housed in the pistol grip for a shorter weapon.  This gun can fire at the rate of 20 per second which makes it extremely deadly.  The military and law enforcement uses it now for security reasons.  But the terrorists  and criminals also use it for terror attacks.  In 2003, Uzi Submachine Gun was phase out by the Israeli army.  It has many mini micro versions around the world and made a total of 2 million sales since it is invented. 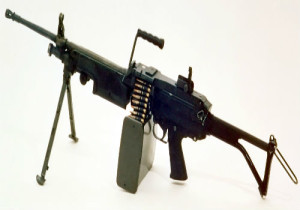 FN Herstal Minimi is a light machine gun that originated from Belgium.  Minimi came from the french word Mini Mitrailleuse which means “mini machine gun”.  This Belgian light machine gun was developed by Fabrique Nationale (FN) in Herstal by Ernest Vervier.  It has many names and that includes M249 SAW.  The rate of this firearm is up to 1,000   rounds per minute.  A man can use this without moving or even when the user is moving.  It is so easy to use that it was adopted by so many countries around the world and even produced it illegally. The Company that created this firearm introduces the new FN SCAR with high precision Rifle, derived from the modern and modular FN SCAR architecture. 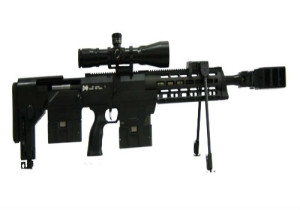 DSR-Precision DSR 50 Sniper Rifle is a product of Germany and designed by Ingolf Reuter.  It is an anti-material rifle type of gun.   This is so costly; this is because the production is so limited.  It needs lot of training for a user to be an expert user of this rifle.   You won’t hear the gun firing because of the speed.  Its main features are hydraulic recoil damping system, has a blast compensator which combines muzzle brake and effective blast pressure reduction and it is lightweight with short length.  It has also a manual 3-position safety.  It has .50 calibre so big that it made it to the top 8. 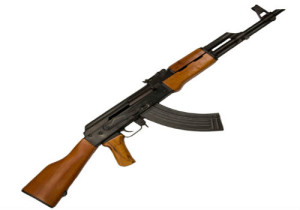 Kalashnikov AK-47 Assault Rifle was first produced in 1947 in Soviet Union, designed by Mikhail Kalashnikov where its name came from.  It is gas operated with rotating bolt.  It is a very simple gun and any simple human being can use and fire it.  The AK-47 is also a cheap rifle, has a user-friendly features and will able to exist for a period of time.  It is only frightening to know that it already sold almost 100 million rifles since it is produced which made it also in the Guinness Book of Records as the most widely spread weapon in the world.  It is frightening because it is believed that the cause of most people’s death in war or violence is the Kalashnikov AK-47 Assault Rifle.  The movie “Lord of War” of Nicholas Cage who played a gun runner showed also how saleable this rifle is because of its good features and cost friendly. 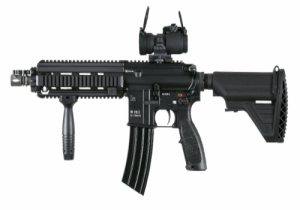 HK416 Assault Rifle or Heckler & Koch HK416 is an assault rifle or carbine produced in 1995 by two Germans, Heckler and Koch, with the request of the United States Army’ Delta Force.  This HK416 Assault Rifle has been tested by the military of the United States and made it as their standard rifle of their armed forces followed by the Armed forces of Norway.  It has better precision, more dependable and more durable.  It uses the highest quality of steel that makes it more accurate to use.  Some of the versions of the HK416 have OTB or Over-the-Beach which means it can be submerged into water fired it under water and it will not be drained.  You can also add grenade launcher to all of its models easily without using any other tools. 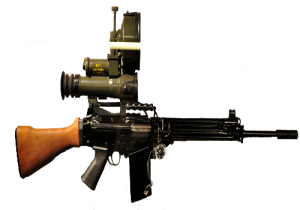 FN FAL stands for Fabrique Nationale de Herstal  or FN the manufacturer, and Fusil Automatique Léger or FAL which means “Light Automatic Rifle”.  It is a battle rifle which originated and designed from Belgium led by Dieudonné Saive.   It is believed that this rifle is one of the most used battle rifles in the world war history of mankind.  There are so many countries that imitated so many models of it with different designs and different sights and many others.  Today, many private US companies still manufacture many versions of FAL battle rifles that have lots of enhancement.   By the way it is not only use for combat rifle as it is being type casted, it can also be accustomed as squad light machine gun or sniper rifle making it as one of the most powerful and murderous gun in the world. 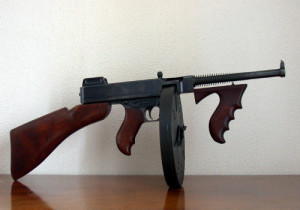 Thompson M1921 Submachine Gun is a product of United States invented by the American John T. Thompson in 1918.  “Tommy Gun”, “Trench Broom”, “Trench Sweeper”, “Chicago Typewriter”, “Chicago Piano”, “Chicago Style”, “Chicago Organ Grinder”, and “The Chopper” are all the synonyms of this famous American submachine gun.  It is widely preferred by the soldiers, police officers and the culprits as well because of its .45 caliber cartridge and has an automatic fire.  It has also great significance to the history that makes it well loved by the gun collectors.   Because of its quick fire it is hard to control that makes it not accurate enough to hit targets especially using the full automatic range.  But if you use it with a shorter distance, the fatality is 100% sureness. 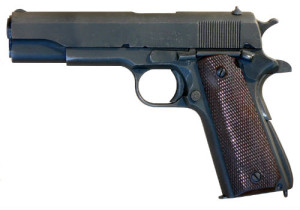 M1911 .45 ACP is a semi-automatic pistol which was famously designed by John Browning of the United States on 1911.  This model was the official firearm of the American Law enforcers from the time it is developed until the year 1985.  But until today many of American police officers and others are still in favor of using this as their sidearm even if they change their official sidearm from M1911 .45ACP to 9MM pistol.  They are more in favor of this gun because it is more powerful and very fatal indeed.  It has a feeding system of 7-round standard detachable box magazine. It is so popular that even on shooting events, this .45 caliber pistol is being fired. 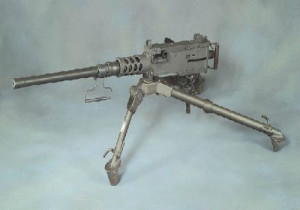 M2HB 50-Caliber Machine Gun is another famous perfected design of John Browning.  It is a heavy machine type of gun which was originally only has a .30-06 BMG cartridge.  When it was revised and developed by Mr. Browning, it became more powerful with a cartridge of .50 BMG caliber.   It has a simple design and so durable that law enforcers apply it in so many ways like in the battlefield on air, land and on ships.  It was widely used during the world wars and until the Afghanistan war.  Like M1911 .45 ACP, this M2HB 50-Caliber Machine Gun is also the official heavy machine gun of the US Marines.  They really love their own-designed gun and you really can count on its great performance! This is proudly in made in the United States.  Capable of single-shot and automatic firing and capable of right and left-hand ammunition feed are two of the numerous features of this machine gun. 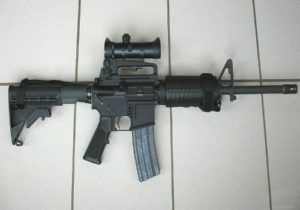 Stoner AR-15 is a semi-automatic kind of rifle made in the United States.  Designed by Eugene Stoner, this Stoner AR-15 came from various versions already.  They all come with identical designs but with distinct accessories.  Mr. Stoner became famous when he created this Stoner AR-15 and thus known as one of the most successful firearm developers.  There are some issues though between the two rifles AR-15 and AK-47.  But when it came to its weight, AR-15 is much lighter.  It’s just AK-47 is easy to use but AR-15 is superior in weight, length, and ease of handling.  And when you ask about the durability, it is a winner!