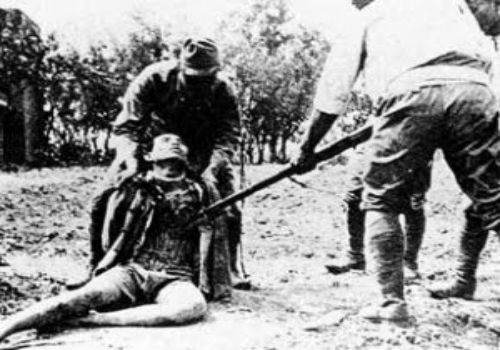 What can make a man kill? Massacres often have different causes but these episodes have one thing in common – abhorrence of the existence of other people. The biggest and bloodiest massacres in history range from the early parts of recorded history – as early as 390 – up to the kind of recent parts – the World Wars. Killings vary from a pistol shot behind the neck to being split in half by a Japanese samurai. Death tolls vary from hundreds to tens of thousands. In all cases, brutal or decent, small or big, ancient or recent, there were tears and bloodshed.

Massacres are one of those events that people, especially survivors, will be wanting to forget for the rest of their lives. To evaluate the intensity of a massacre is like remembering how painful break-ups were and how ugly was that person that replaced you. However, for the sake of knowledge (and entertainment to gore-loving fans), we dug through the barriers of time and bring you the top 10 biggest massacres in history even ‘Leatherface’ could have cringe at.

10. The Sabra and Shatila Massacre 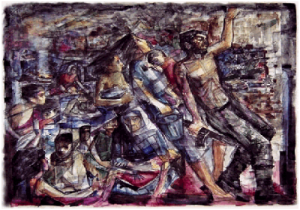 The spotlight of the Lebanese Civil War in 1982 shone on the Sabra and Shatila Massacre. With the total number of wasted Palestinians ranging from 762 to 3500, this genocidal episode proved to be one of the biggest massacres in history. The massacre was executed as revenge for the assassination of Lebanese President BachirGemayel which was wrongly accused to be a ploy of Palestinians.  Journalists that covered this event claimed to have seen severely mutilated bodies of persons of all ages. An American journalist even saw grimmer images – children that were torn from limb to limb; pregnant women with ripped stomachs; and hundreds of babies that were thrown in garbage dumps. 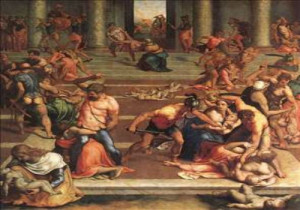 The 1066 Granada Massacre belongs to a series of anti-Semitic events that killed a rough estimate of 4000 Jews. Muslim mobs attacked the royal palace after an anti-Semitic poem of Abu Ishaq was read by the Muslim-ruled city of al-Andalus. The poem intended to bring down Joseph ibn Naghrela, the vizieror political advisor to the king, in order for Abu Ishaq to obtain an office at court. The poem was as malicious as a publicized death threat. Malice was ridiculously contagious that soon, a rumor that Joseph had intentions to kill the king in order to allow his rival to take the throne, and then to kill the king’s rival to claim the throne for himself, spread throughout the city. Joseph was crucified by the Muslims followed shortly by the bloody ancient massacre of 1500 Jewish families. 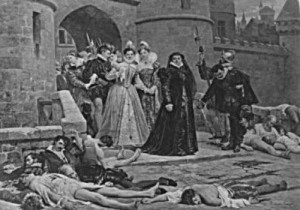 St. Bartholomew’s Day Massacre which slaughtered a rough estimate of 2000 to 70, 000 Protestants during the French war of Religions was quoted as the worst religious massacre in the 16th century. Conscious of the French kingdom’s difficulties, their loose grip on the throne and the return of Protestants in the king’s council, Catherine de’ Medici, mother of Henry IX, planned to marry her daughter Margaret to the Protestant prince Henry of Navarre. High officials of both religious parties attended the wedding in Paris which was a popular Protestant-unfriendly city. Coligny, a high Protestant councilman that attended the wedding, was almost assassinated by one of Catherine’s hit men. This event raised the defenses of the Protestants which in turn was interpreted as a coup’ by the Catholics. Catherine de’ Medici armed the citizenry, shut the gates of the city and the rest was history for the Protestants.

7. The Massacre of Thessalonica 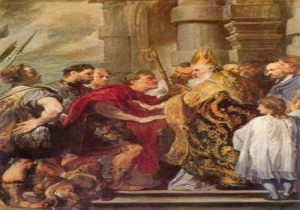 The massacre of Thessalonica is one of those ancient nonsensical bloody riots ever recorded in history. 7, 000 Thessalonians were slayed “most unjustly and tyrannically”, by the Byzantine, without even any judicial sentence charged against them. This all started with Butheric, the chief commander of Illyricum and also of Thessalonica, after arresting a famous charioteer for attempts to rape a male cupbearer, (The charioteer, by the way, is also a he) refused to grant the demand of the people to release the offender. The Thessalonians revolted and murdered Butheric and other Roman authorities. In turn, this angered Theodosius I, the emperor, who released an order to the army to slay everyone – “the innocent and guilty alike”.  After some short span of time, the emperor had changed his mind and quickly sent a messenger to cancel his stupid order. However, he was 7000 deaths too late. 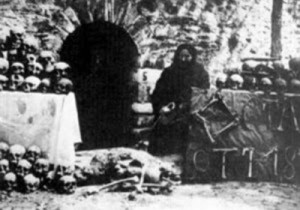 The Batak was a piece of hell brought to Earth by the Bashi-bazouk who were irregular soldiers of the Ottoman army during the April Uprising in 1876.         When the men of Batak successfully killed some Ottoman leaders, the authorities sent 5000 Bashi-bazouk led by Ahmet Aga to deal with them. After realizing that Ahmet Aga’s forces were stronger than theirs’, the men of Batak tried to negotiate with him. Aga swore to stop the attacks once Batak was disarmed. The rebels trusted this deal; they laid their arms down which was the last mistake they had ever made. The Bashi-Bozouk slaughtered everyone and everything in their sights. People were stripped of their valuables and then shot mercilessly.  The leader of Batak received the special treatment – shot to the eye, made toothless, slowly impaled like a shish kebab, and then roasted alive for half an hour while being watched by his own wife and children. After a few days, Russian inspectors discovered the horrors of the slaughter – heaps of dismembered body parts, skeletons of babies and children, raped women and chunks of roasted human flesh.

5. The Massacre of Elphinstone’s Army 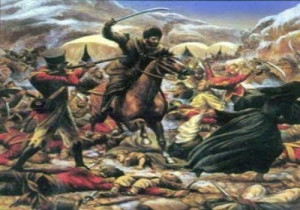 Incompetence and indecisiveness of General Elphinstone was the cause of death of almost 16, 000 British and Indian soldiers and civilians during the First Anglo-Afghan War in 1842. When Abkar Khan, son of Dost Mohammad who was former ruler of Afghanistan, assembled tribesmen to form a guerilla army that shall battle the British East India Company, there was decline of British power in Kabul. In order to prevent further damage to their people, Elphinstone agreed to slowly disarm his troops and withdraw so that Afghans will let them go to Jalalabad, their safe haven.  As soon as they began exodus, civilians and soldiers were shot by Afghan tribesmen. Those that were injured and sick during the travel were also murdered. Those that survived the ambush of Afghans, having no hopes of conquering the then freezing mountains they were crossing, took their own lives. Only William Brydon, an assistant Surgeon, managed to survive this nightmare with a sheared skull. 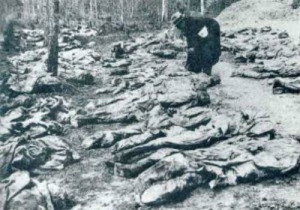 Katyn Forest Massacre is a series of mass executions of about 22,000 Polish by the Soviet Secret Police in 1940. The main motive of this terrible incident was to ensure a future where no Polish lingering in the Soviet Union’s border. The executions were done methodically. First, personal information of the condemned will be taken and checked. Then, he/she will be dragged into a room line with sandbags and will be asked to kneel. The executor will simply fire a bullet at the back of the head and drag him out of the room into a truck filled with other dead bodies. It was known that German pistols were employed for the killings rather than Russian ones since these weapons have lesser recoil and that recoil becomes painful after you’ve pressed the trigger a lot within a day –  a few hundred times a day. 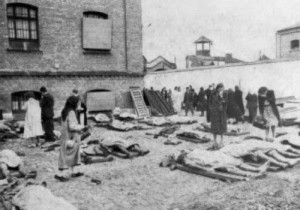 The NKVD Prisoner Massacres are also a series of massacres done by the NKVD Soviet Police one year after the Katyn Forest Massacre. The NKVD was responsible for evacuating prisons but the Soviet Police could not pay attention to all of them. A massive 100,000 Polish, Ukrainians, and Baltics perished as the German invasion commenced in Russia. Most of them were imprisoned and executed without trial. Thousands were massacred during a death march. Most were shot in their own cells. Unfortunate ones were killed via grenades. Some were starved to death. There were also prisoners killed by bayonets 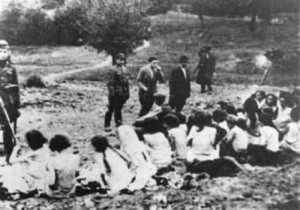 The BabiYar massacre occurred within the same year of the NKVD Prisoner Massacres. About 150, 000 Jews were killed in the BabiYar ravine; an order issued as retaliation for guerilla attacks against German troops. Before being killed, the people were asked to undress, in order to loot their clothes and belonging, and were beaten if they disobeyed. Large crowds were instructed to march at the bottom of the ravine where the massacre was done. At this point they already knew what their fate was. People were laid down on top of dead bodies and shot in the neck by a submachine gun. In this way, bodies will be arranged like paper stacks. Those that were still gasping were shot again. BabiYar is the largest two-day massacre during The Holocaust. 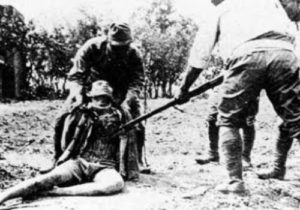 With a death toll of 300,000 committed by the Japanese, the Nanking Massacre ranks number one in the biggest massacres in history. There were even contests between Japanese officials on the most number of civilians killed by a sword. The massacre happened in a six-week period where there were widespread cases of rape. Women of all ages were raped consecutively by at least 3 men per day. When their husbands or brothers intervened, the Japanese stab them with a bayonet or shoot them with their rifles. Women were brutally mutilated when the soldiers where done raping. There was also a case of a pregnant woman being gang raped then gave birth 3 hours after the event. Young children were cut wide open in order for them to be raped by the soldiers. There were also cases of the Japanese forcing incest. Sons raped their mothers and fathers raped their daughters. Even monks who swore a life of celibacy were forced to rape women.