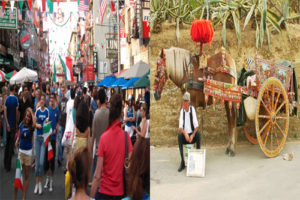 Italy is located in the part of Southern Europe. Navigating on the part of Southern Italy, you may find Sicily. This island is bounded by the bodies of waters – Mediterranean, Tyrrhenian and Ionian Seas. It is the vastest island found in Italy. It is also referred to as the autonomous region of Italy, which means Sicily have their independent local government, administration, legislation and finance. The main purpose of being an autonomous region is to preserve the cultural traditions, heritage and language of the native island.

Even if Sicily resides within the vicinity of Italy, both differs primarily in terms of livelihood, food, traits, dialects and beliefs. Italian is a general term called for the people residing in these two geographical areas, yet the people of Sicily are specifically called as Sicilians. The native language in Italy is also referred to as Italian but Sicilians have their own dialects aside from the mother tongue language. When you come across the word Italians, they are popular for their influence in European cuisines such as pizza, pasta, lasagna and many more. On the other hand, the Sicilians are famous for their folk music and industry of agriculture and manufacturing.