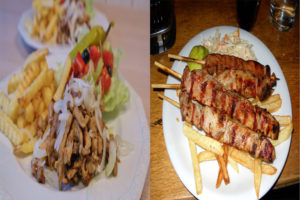 When you come to stop by at Greece, their cuisines are mouthwatering in taste. Gyros and Souvlaki are some of the popular food in the Greek plates. The main ingredients of these European cuisines constitute meats and vegetables.  Most tourists and foreigners are being confused as to their identical appearance and taste. Let’s find out the differences of these two.

Gyros  is a kind of traditional Greek food rolled on thin round pita bread that has roasted slices of meat (usually in a form of beef, lamb or pork) with mixed tomatoes, onions and sauces inside. The term “Gyros” was taken from the manner of preparing the dish whereas the meat was rotated on a spit. The cooking device used is an electric broiler in which the meat keeps moving as attached on the spit.

On the other hand, Souvlaki is also made up of roasted slices of meat with mixed tomatoes, onions and garnished with sweet or spicy sauces, but this time it is skewed on a wooden stick and grilled. The wooden stick is often referred to as Kalamaki in Greek. It is typically a fast food kind of dish and may be served using pita bread or put over a bowl of rice.  The word itself Souvlaki means “skewer” in Greek language. Grilling is the method of cooking for this kind of dish.