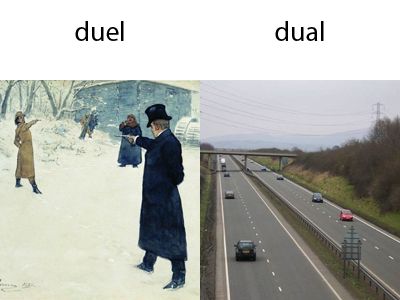 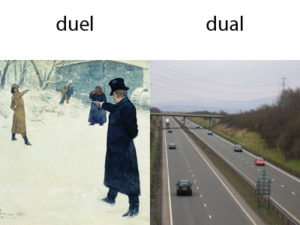 The word “duel” refers to a declaration of a battle between two opposing persons or group of people with the aim for honor, glory or draw of a competition. This kind of combat is accompanied with the use of weapons, forces or intellectual skills. This term is first used around circa 1645 as a noun and during 15th century as a verb. It was originated from the Middle English, Medieval Latin and Old Latin “duellum” which means war. Figuratively speaking, it can be used in a sentence as a noun, transitive verb or an intransitive verb.

Conversely, when we hear the word “dual” it implies two parts or having a double use, or denotes something in pairs. The word is first used around 1597 as an adjective and during 1650 as a noun. It is derived from the Latin word “dualis” which means duo or two. It can be used in a sentence as a noun or an adjective.