Difference Between Roma Vs Plum Tomatoes 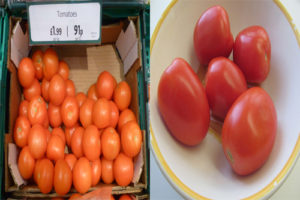 Tomatoes are used as an ingredient in cooking different food stuffs. Fish, fried eggs and soup are bland without tomatoes. You need tomatoes for flavor, thicken the soup and give it color. Tomatoes serve as health food eaten raw, cooked as fruit and vegetable. Different tomato varieties are cultivated in different parts of the world.

Roma and Plum Tomatoes are two kinds of tomatoes widely grown for consumption and for commercial purpose. Walk into any supermarket fruit and vegetable section to get fresh Roma tomatoes on display for sale. Roma tomatoes have high fruit yield making the produce viable commercial commodity. You can also get Roma canned tomatoes made into sauce to preserve its shelf life. Select freshly picked red, yellow Roma tomatoes in pear or egg shapes.

Plum is another popular kind of tomatoes grown in Europe and America. Plum tomato shapes vary from oval, to cylindrical. Sizes also differ. Most plum tomatoes are large. Tomatoes are vulnerable to severe drought weather conditions. Farmers lose tomato plants to wilt which retards growth of the plant. Tomatoes grow to maturity in three months on average. Bad tomatoes speed up rot in the containers if you do not have means to preserve the produce for future consumption.