Madagascar is considered as the eight continent of the world because of its diverse and large number of floral and faunal population. Many endemic and native species are found in the forests of Madagascar. Some of these are listed below: 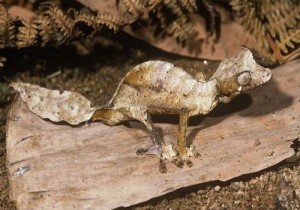 Flat-tailed gecko (Uroplatus henkeli) is famous for its camouflage. It is endemic in Madagascar. This small creature belong to the Order Reptaliacan make itself unseen or invisible in the day because of its light-reflecting body variations. It can hide itself on fallen leaves, and most especially on barks. Camouflage, however, is not its only defence mechanism. A flat-tailed gecko, in times of danger sheds it tail to scare the predator or sometimes it opens its mouth wide to reveal it bright red cavity. It feeds on insects on the ground of on trees. Today, the Flat-tailed gecko is listed as “vulnerable” animal on IUCN (International Union for Conservation of Nature). 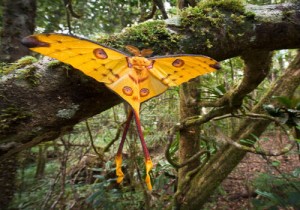 Comet Moth (Argema mittrei) belongs to the Phylum Arthropoda. Though not endemic in Madagascar, it was a native and believed to have originated from there. A male Comet Moth is considered as one of the world’s biggest silk moths having a wingspan of 20cm and a tailspan of 15cm. The female Comet moth lays egg from 120-170. The larvae feed on its natural habitat, mostly on Eugenia leaves. An adult moth can only live 4-5 days, thus; naturally Comet Moths are considered endangered. However, there are many studies and programs that attempted and which succeed on breeding Comet Moths in captivity. 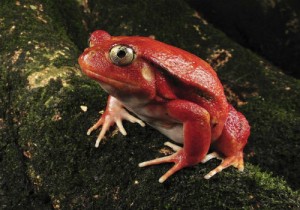 Tomato frog (Dyscophus antongilii) was called as such because of its bright red-orange colour. They belong to the Class Amphibia and like all types of frogs; a female Tomato frog is typically larger than a male Tomato frog. One distinguishable traits of a Tomatofrog it the black spot on its throat, also its bright colour serves a defensive mechanism when a predator is eyeing it. It also produces a white glue-like substance when in danger, this substance can have a negative allergic reaction to man. A female Tomato frog can lay up to 15,000 eggs per cycle. Based on IUCN, the Tomato frog is considered “nearly vulnerable” despite the large amount of egg it can produce per cycle. 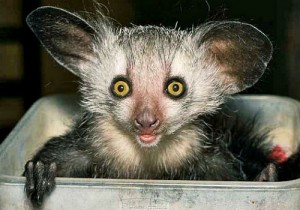 Aye-aye (Daubentonia madagascariensis) is a native─ but not endemic─ primate in the Madagascar. It belongs to the Class Mamalia. It has a rodent-like tooth that acts as a defensive mechanism and one of its distinguishable characteristics is a thin middle finger. It is nocturnal and has a weird technique of finding food through percussive foraging. Aye-aye is an arboreal primate, thus it eats, sleeps, travels and even mates in high trees. It was considered extinct on 1933, but on 1957 it was corrected when a new sighting of such was recorded. Today, it is considered as Endangered─ deaths of Aye-aye were mostly because of farmers killing them to protect their crops. 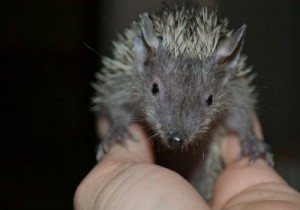 Aquatic tenrec (Limnogale mergulus) is one of the most unpopular and most unstudied animals in the world. It is often called the “forgotten” creature. Aquatic tenrec is a water-loving mammal, it loves diving and swimming for insects─ which it eats─ during the night. Aquatic tenrec is a nocturnal, thus it sleeps in the day. A female tenrec has a long gestation period which can last up to 4 weeks; it will then give birth to a same size tenrec. According to IUCN red-list, the aquatic tenrec is considered Vulnerable due to different stresses from habitat loss in Madagascar. 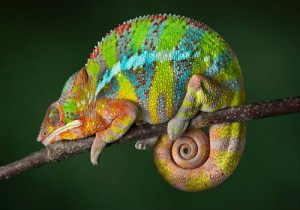 Phanter Chameleon (Furcifer pardalis) is popular for its forked feet. It belongs to Order Reptalia. It is a type of Chameleon found in Madagascar. The male phanter chameleons have brighter colors than the female phanter chameleons. Also, the males have larger bodies, almost twice bigger than the females. They can grow from 20-45cm in length. Their forked-like feet give them better grip especially when climbing trees. Rumors said that chameleons can camouflage but in truth, they can’t. They are born with natural colours depending on the locale where they are born. It is also included on IUCN’s red-list; however, it is still on the “least concerned” species─ which means there is still no threat on its extinction. 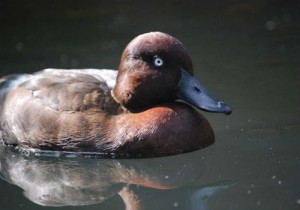 Madagascar Pochard (Aythya innotata) is an endemic duck in Madagascar. One distinguishable characteristic of Madagascard pochards is that they always come in pair. Their colour ranges from mahogany-brown to light brown. Typically, it can grow from 45-56cm. It was rediscovered in 2006, and in 2008 a total of 25 adult Madagascar pochards were recorded. Its nesting period is from July to February. They are mostly found in shallow marshes. Today, it is listed as “critically endangered” on IUCN’s red-list. Threats are from natural habitat and genetic stress. 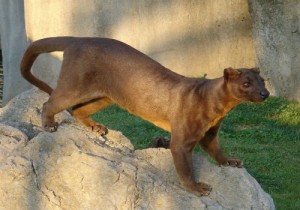 Fossas (Cryptoprocta ferox) are an endemic mammal in Madagascar. It is one of the most confusing animals because of its physical characteristics looks like those of cats. Adult Fossas body sizes range from 70-80cm and is always compared to a tiny cougar. Like most other mammal, male fossas are bigger than female fossas. It climbs in trees through its claws and ankles. The fossas have the biggest mammalian population in Madagasar. It feeds on rodents, lizards and birds. Despite having the biggest mammalian population, it is listed as “Vulnerable” on IUCN’s red-list. Primary threat is destruction of natural habitat. 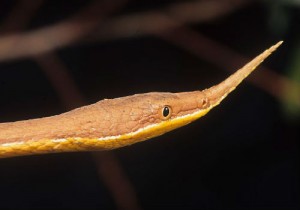 Malagsy Leaf-nosed snake (Langaha nasuta) is an endemic species found in Madagascar. It is called such because of its flat leaf-shaped mouth. It is often found on dry floors of deciduous and rain forest and on trees about 2m high. Though there aren’t much information about the Malagsy leaf-nose snake, it is recorded that it can grow up to 1 meter long. Its colour yellow sometimes aids as camouflage in times of danger. It feeds mostly on lizards. If human are bitten by this snake, it can cause severe pain but not deadly. It is listed as “threatened” species on IUCN’s red-list. 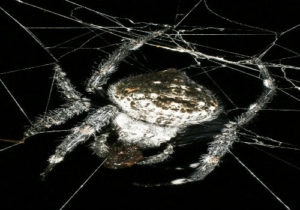 Darwin’s Black Spider (Caerostris darwini) was discovered in Madagascar in 2009. Its web is popular as the strongest and one of the largest spider webs─ which ranges from 900-28000 square centimetres. The silk it produces is twice stronger than a common spider silk and 10x stronger than kelvar. A female Darwin’s black spider is typically larger than the male ones. It feeds on flies and mayflies. Since it was discovered just years ago, there are still few studies and facts about it.