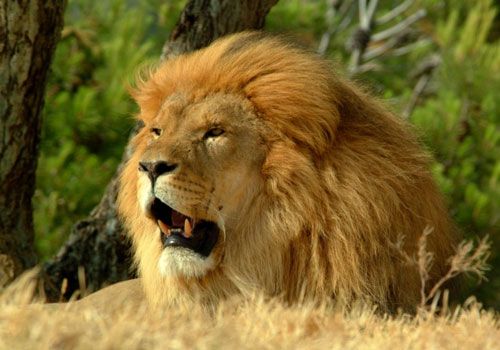 The world has witness many phenomena throughout its existence. There were times where animals like dinosaurs were dominating the earth. These animals were a threat to other mammals and even its own kind. The threat these animals pose to living things date back to pre historical era where humans were living at the mercy of nature. Notwithstanding, these animals are still dangerous to modern man. The level of peoples’ awareness as to how these animals could affect their lives is minimal. We do often admire some of them as pets and others we get frightening by their demeanor. Just as human beings, every animal is friendly to some extent but has its own limit. The dangerous aspect of animals is mostly determined by the level hazards they encounter. Most of these animals we are going to discus here have their habit in forest and deep waters as well as our immediate environment. When it comes to man’s encounter with any wild animal safety is key. Most of these animals have been reported to have attack hunters and other people in various forms. Our discussion today will concentrate on these most dangerous animals ever known which includes mosquito, elephant, crocodile, bear, Cape buffalo, lion, eastern brown snake, great white shark, saltwater crocodile and hippopotamus. 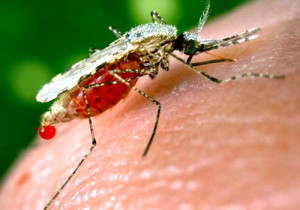 The name mosquito is giving to about 2000 species of two-winged insects. They easily breed in areas like the tropics, Arctic Circle and low and high lands. They are in two groups male and female. Both the male and the female prefer nectar and juices in plants but the female has unique taste for the blood of warm-blooded animals by using its mouthparts. When they bite, they inject their salivary fluid into the wound they create, causing swelling and irritation. Afterwards, they inject infectious microorganisms and thus transmit such diseases as malaria, yellow fever, dengue, and lymphatic filariasis, tularemia.

The reason why they are extremely dangerous is because some of the transmit diseases are fatal and without treatment.  According to W.H.O, in the year 2010, malaria alone caused an estimated 660000 death mostly among African children. Besides these deaths, malaria could make you weak to the extent that your productivity could reduce. 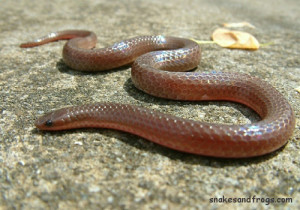 The eastern brown snake is commonly found in open grasslands, pastures and woodlands in eastern Australia. It has scientific name called Pseudonaja textilis and they are diurnal  which means it is active during the day. It is noted for its surprising speed during the hot days and its aggressiveness. Upon seeing danger it erect its head high and this usually form an upright S-shape. The snake usually avoids confrontation with humans, though it can be highly aggressive if provoked and can pursue you over a long distance.  Because of their taste for rats and mice, they get attracted to rural and farming areas. These areas are preferred due to the bushes and grass which normally provide shelter for them. 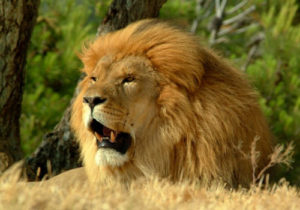 Lions are one of the wild animals, which are noted for their bravery and power. Evidence shows that lions have live several years in Africa, Europe, the Middle East and Asia. Lions are the largest cat in the cat family and they prefer to be in groups called prides. The pride is a family of six females, their cubs and the males who mate with the adult females. By training, the young males eventually leave and establish their own prides by taking over a group headed by another male. Each pride consists of 2 to 12 adult females and their cubs.

Female lions are the pride’s primary hunters. They often hunt in groups. They secretly surround their potential prey so that it will have nowhere to escape. Sometimes in addition, they may drive prey into the reach of others.  This teamwork helps them to hunt for larger animals such as zebras and buffalo. For smaller prey, one lion can hunt it alone to kill, such as warthogs. After the hunt, the females share their catch in order of maturity where the big males eat first and the cub is last. 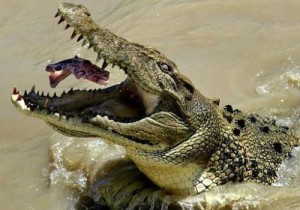 Saltwater or estuarine crocodile is one of the Earth’s largest living crocodilian. The estuarine or saltwater crocodile could grow up to 7 m (23 ft) in length, and weighs up to 1000 kg (2200 lb). The average-size males reach 17 feet (5 meters) and 1,000 pounds (450 kilograms).

They are commonly found in regions like eastern India, Southeast Asia, and northern Australia and the favouarable ground for their breeding are the brackish and freshwater regions. They are excellent swimmers and have often been spotted far out at sea.

They are great animal, which seem to be very opportunistic predators. They always hide patiently beneath the surface near the water’s edge, waiting for potential prey to stop by for a sip of water. The tail is sometimes used to capture prey. Their target preys include water buffalo, monkeys, wild boar, and even sharks. Since, they hide beneath the water their victims hardly sees them coming. 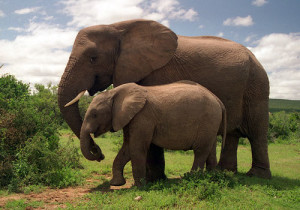 The elephant is the largest animal on land due to its huge mammal characteristics. They are mostly found in Africa and some parts of Asia. They are friendly but unpredictable as they can attack without warning. Due to its unpredictable nature, it has been known to kill zookeepers who have been with them for as long as 15 years. Their physical features make them destroy virtually anything that comes their way and in the moment of anger, they can be dangerous.

Wild elephants could cause damage to humans and properties, due to physical stature they can easily trampled or crush people. Around 500 people die by elephants every year. 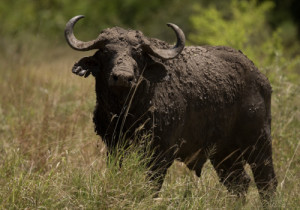 The Cape buffalos are commonly found in Africa that is southern and central Africa. Due to its extremely aggressive and unpredictable nature, it is affectionately called “black death”. It can weigh between 900 to 1800 pounds and measures about 1.7 m (about 5.5 ft) at the shoulder. They are very gregarious meaning they always prefer to be in company with others. The love they have for each other makes them fight their enemy together and this attitude saves them from lions, crocodiles, or hunters. They use their massive base horns to defend themselves. They being one of the most dangerous animals on land have been found killing over 200 people in a year. 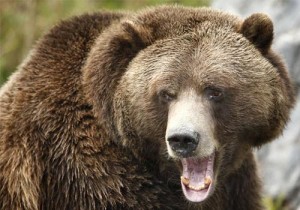 Bear is another mammal humans must take note of and they belong to mammal family called Ursidae. They are large, stocky body and have powerful limbs. They are huge and stout with relatively short legs. They can swim, run fast usually up to 50 km/h, and could climb trees. Bears are mostly found in the Northern Hemisphere and some parts of the Southern Hemisphere. Whenever you meet a bear do not make any effort to run away or try to climb tree because it is perfect in those areas. The bear when frightened or have the feel to fight, it will sprang on its legs, perhaps to scar its revival.  Their clawed forepaws are their most defensive weapon and it is used to slash their opponents. It is very rare to hear bears attacking human and it only happens when human encounters with a bear  result in humans surprising bears or causing them to feel threatened then they will respond  aggressively. 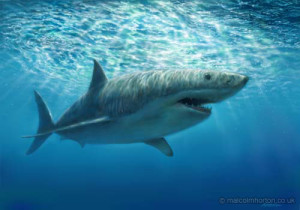 The great white shark is strictly carnivorous and found mostly in tropical and temperate oceans and seas worldwide. Dyer Island, South Africa, is the densest place for sharks that is why there is the place for almost all shark research. The great white shark has a narrowed muzzle, black eyes, and hefty, saw-toothed.

Their hunting techniques are classified as ambush hunters, taking prey by surprise from below and these techniques vary by species of the prey. It hunts marine mammals and fishes. The speed they use to hunt is so swift that it makes them leave the water completely. They are also classifying as “test-bites”. They do test-bite virtually everything that comes their way including human being. The great white can tear up to 13.6 kg (30 lb) of flesh in a single bite.

The number of attacks associated with this mammal is not many. For instance, in the Mediterranean Sea there have been only 31 confirmed attacks against humans in the last two centuries, most of which were non-fatal. 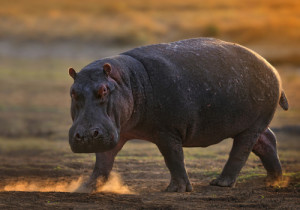 After the elephant, the hippotamus is the second largest land mammal and the heaviest despite being considerably shorter than the giraffe. They are herbivorous mammal mostly found in mangrove swamps typically in Africa. They enjoy being calm in the water or mud during the day. The most interesting thing about them is their reproduction and childbirth occurs in water. Hippos have an average speed of 30 km/h (19 mph) over short distances and this makes them outrun human despite their physical structure. In Africa, it is regarded as most dangerous animals due to its aggressiveness and swiftness. This behavour of this animal makes its hunters become very careful as to which range to target them. 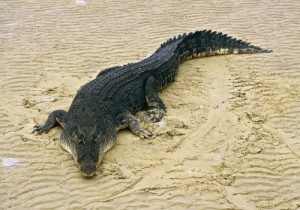 Crocodiles are large aquatic tetrapods that live throughout the tropics in Africa, Asia, the Americas and Australia. The external features that make crocodile  different from alligators and caimans are the narrower and longer heads. Crocodiles are very fast over short range and its out water ability is not of exception. The land speed record for a crocodile is 17 km/h (11 mph) measured in a galloping Australian freshwater crocodile. A crocodile’s physical features make it to be a successful predator. Crocodiles have acute senses, an evolutionary advantage that makes them successful predators. Their eyes, ears and nostrils that are located on top of their heads, allow them to lie low in the water, which makes them hidden from their prey. Their good night vision helps them to hunt in the night. Crocodiles mostly eat fish, amphibians, birds, reptiles, mammals and occasionally cannibalize on smaller crocodiles.

Animals are part of man and what we can do now is to develop safety mechanism that could avert some of the misfortune we might encounter.