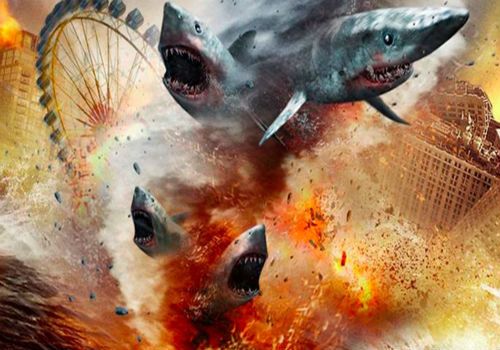 When the first Sharknadoappeared on the small screen in 2013, nobody thought that this movie will spun a sequel much less one that will be talked about. Now the who’s who in Tinseltown are lining up to make an appearance in the possible third installment to be released in 2015. After we saw cameos after cameos in Sharknado 2 who will we see in Sharknado 3?

Sharknado 2 starts where Sharknado 1 left off. Life for Fin Shepard (Ian Ziering) and his ex-wife April Wexler (Tara Reid) seems to be on a high after getting a book deal and writing about their experience in “How to Survive a Sharknado and Other Unnatura Disasters”. On their way to New York to promote their book, a freak and again, another unnatural weather occurrence seems to follow the couple. The carnage starts 30,000 feet up in the air and it seems there’s no escape. Will our protagonist survive the second attack? How many more lives will the shark-infested tornadoes take? And how many hungry sharks are there in the sea to produce this kind of excitement over one, or rather two unbelievable movies?

With a story line so bad it’s really good, let’s take a look at possible “life lessons” we can take away from Sharknado 2.

10. During an EF5 sharknado 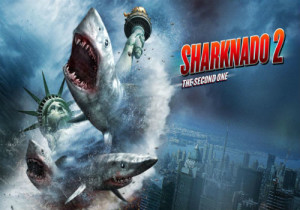 Okay, an EF5 tornado means total destruction of property, possible lives loss and a complete stop to whatever you are doing and hide yourself to safety. You do not go sight-seeing and visit the Statue of Liberty, go to Times Square and see the Naked Cowboy or the Empire State Building. Moreover, you do not give an EF5 category Sharknado a New York attitude and say you bite back to whatever else will be biting you. When an EF5 Sharknado is announced, you go hide and pray. You pray that sharks don’t find you and you pray that this thing will be over really soon.

9. Vivica A. Fox cuts some sharks apart with a sword 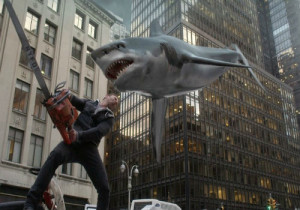 Much like her character Vernita Green on Kill Bill, the sword wielding Ms.Foxshows expert handling of the weapon to fend-off the shark attack. In the movie Sharknado 2, Fox played Skye, Fin’s ex-girlfriend. The most notable scene for Fox is the hotel roof top scene where she and Fin are planning to send a bomb up the tornado . But alas, too much humidity rendered the explosives useless and the plan was a bust hence what’s the next best thing to do? Fight off the sharks using chainsaw and a sword! 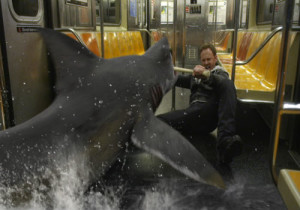 How strange it is to see New Yorker have easy access to shovels, spears, pitchforks, swords, guns and chainsaw. Lots and lots of chainsaws. In a legitimately advance city, viewers sometimes are left wondering why the New York natives have these equipment in their easy reach. Do they need to cut wood in Central Park to store in the winter? Do they need to shovel their driveways?Is there a need mix hays in the shed? These are the question we may never get the real answers. On the other hand the materials you need to make a bomb let alone to stop a Sharknado is easily within your reach in the Big Apple.

7. Kelly Ripa and Michael Strahan are way too good at this 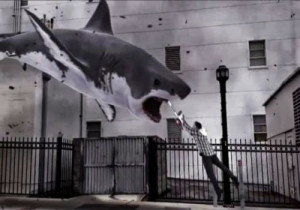 Kelly Ripa and Michal Strahanare the host of Live! with Kelly and Michael, so to see them wrestle (Michael) and stomp on (Kelly) a shark is pretty awesome! The two hosts were game to appear on the movie and were even good at it. Michael Strahan is a former NFL quarterback who spent his entire playing career with New York Giants. He was chosen amongst various TV personalities as a replacement to the original Live! host Regis Philbin. Kelly Ripa on the other hand is already a TV staple having appeared on soaps and movies before starting her career as a host in 2001.

6. The Today Show is awkward even when it’s being attacked by sharks 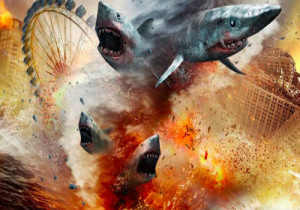 Much like the showLive! with Kelly and Michael, it seems that the team from the Today Show jumped on the Sharknado bandwagon and had an appearance on the film. Matt Lauer and Al Roker represented the show with all seriousness. Lauer is seen reporting and asking resident weatherman Roker what to expect in the EF5 event much like what they do on at their regular programming. The hosts announce earlier in the Today Show that they have finished shooting their campy cameos in the movie, inciting envy among another co-host. Their cameo ended with a stabbing of a shark that miraculously landed on their reporting table. 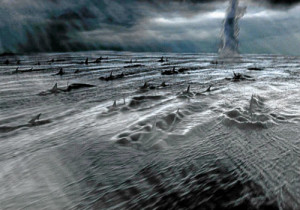 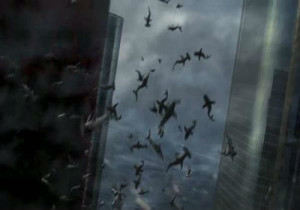 There were bad cameos and then there were really campy cameos. Kelly Osbourne got bitten early off the film appearing as a flight stewardess on the doom flight. Robert Hays best known as a pilot in the comedy Airplane! played the pilot on this doom flight. Wil Wheaton from Star Trek: The Next Generation, didn’t survive the catastrophe either. Andy Dick who played a cop in New York unfortunately was annoying as usual. And alive after the attacks. Al Roker, Matt Lauer, Kelly Ripa and Michael Strahan survived as well. Judah Friedlander died without his trucker hat. Judd Hirsch who was very memorable in the TV series Taxi was a taxi driver – and died trying to escape. Billy Ray Cyrus and Julie Brown are alive because they work in the hospital and they are needed.

3. Climate change is real, and sharknadoes are the proof 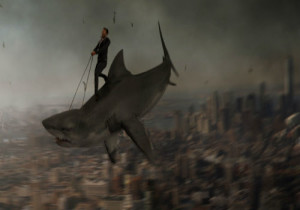 Yes, Climate change is real and there is still an ongoing debate from scientist and weather observers whether this phenomenon will lead to bigger catastrophe or just be considered a normal reaction of nature to our ever changing and warming Earth. There are vortexes of fire also known as fire devils which occurs when a strong fire gets caught in a strong wind thus creating a vortex that can suck out nearest debris nearby thus literally adding more fuel to the fire. Most of weird weather events also occur in the sea due to the mixing of hot water and cold air so it may be possible that when a freak weather event occurs, we may be seeing sharks dropping off from the air.

2. Sharknadoes and Midwestern tourists have the same itinerary 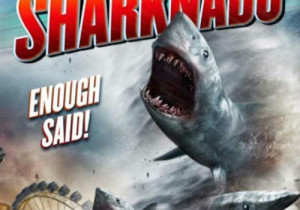 Since the movie occurred in New York, it’s fairly possible to say that where there are people, so will the Sharknadoes. In a city compromising of more than 8 million individuals, it’s hard to find a place that isn’t populated. First we see the famous Citi Field, home of New York Mets where some of the characters battle the sharks. Then there was the Statue of Liberty where the head of Lady Liberty will be seen rolling around the city causing destruction and carnage along its way. Seriously, with a category EF5 Sharknado advisory, it’s really surprising seeing people go about their normal lives like driving a taxi, riding the subway, watching the Mets game among other normal things to do if there’s no Sharknado attack.

1. You don’t need to have seen Sharknado to follow the story of Sharknado 2 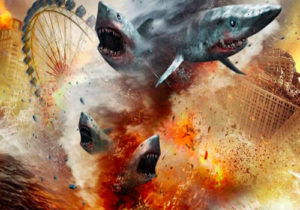 When the second installment of Sharknado premiered on the Syfy channel, there was a great fanfare and social media frenzy behind the film. The film’s plot is unbelievably campy not to mention cheesy, it’s like watching a film created by 6th grader. A very smart 6th grader that is.The special effects need to be polished, Tara Ried’s acting left a little to be desired and a weather phenomenon to ridiculous to happen. But here we are on the helms of another Sharknado success story. Since the original Sharknado happened in LA, curious goerge out there don’t need to bother to see the first installment to understand the film. Both films only have one story, it’s to survive a Sharknado and get out of it in one piece.