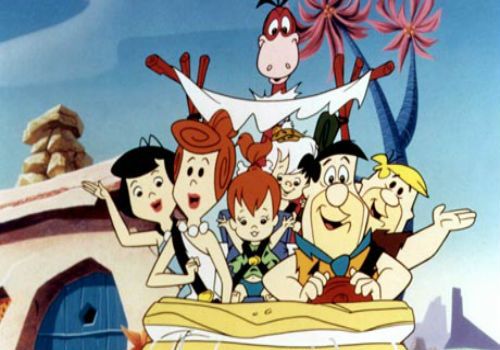 A TIME TRIP WITH 10 CLASSICS OF HANNA-BARBERA

As a kid, Saturday morning was a magical time, the only time I didn’t mind waking up early. The reason? Good food and the Morning Cartoons. And what what would Saturday Morning Cartoons do without the name Hanna-Barbera? This amazing duo created the masterpieces that my parents approved of back then. Back then, I expected their name to appear in each and every cartoon show I watched. Their themes resonate with the minds of children back then: friends, family, adventure, jokes and action. No asking a parent: “Why did they do that?” or anything. Just good clean fun.

Little did I know that Hanna-Barbera was also pitching to an adult audience back in the days. And some of their shows have been on a watchlist for “excessive” violence. So much for kid-friendly. Maybe it was the ‘sanitized’ versions I watched as a kid. Anyway, that doesn’t detract from the masterful works they created back then. They molded a generation of children with their shows.

Do you have a hunkering for some good old-fashioned entertainment (and not the violent-prone cartoons of today nor the overly sexual anime of Japan)? Taking care that your children don’t grow up not like you? Or just yearning for the memories of the past? Come ride with me back to the memory-lane of the shows that accompanied us while growing up: 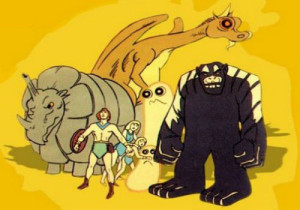 Hercu-what? Not many people know about this series back then (including me). I was introduced to this gem courtesy of Mr. Jonny Quest (see below) by way of their background sounds. This series felt like a more violent Flintstone-Jetson combo, which accommodated my (then) growing tastes. This show features a family in a primitive planet yet high-tech enemies and gadgets abound. My favorites back then were Gloop and Gleep, the two slimeballs (I am NOT using this word derisively) that usually utters weird sounds and gives advice to help the Herculoids out of a tight mess. I used to make clay models of Gloop and Gleep, then threw them against the wall to practice my fastball skills. 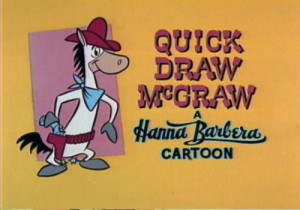 To tell the truth, I liked ‘El KaBong’ much better. Bashing someone over the head with a Git-Ar feels so much better. Well, technically he’s the same guy, but whatever. Solving problems with his (supposedly) fast gun, Quick Draw wouldn’t be anywhere without his sidekick Baba Looey. The mostly quick thing about McGraw is getting out of a bad situation (when he realizes it). The show also features Augie Doggie and his Daddie, plus the detective duo Snooper and Blabber. I have to admit, Snooper was the first cat I saw as heroic, and in no way deserves a kick from my toddler foot. 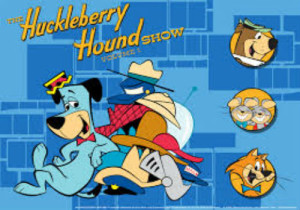 This owld dawg introduced me to the classic song “Oh my darling, oh my darling, oh my darling Clementine,” not knowing that the song was older than my great-grandpap (and I was singing it out of tune). Back then, I can make a mean paperdoll of Old Huck out of origami. He was the first model of what “being witty” meant to me back then. His tired drawl and mostly indifferent demeanor with sleepy eyes mostly signaled “smart aleck” to all the grown-ups back then. But this guy is not all he seems. He thinks fast and has a heart of gold. 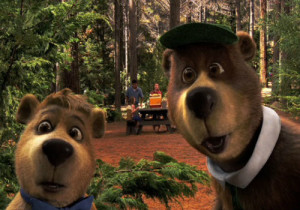 Back then, I don’t have the faintest idea of who the great Yogi Berra was. But I do know Yogi Bear. The first Hanna-Barbera character I knew as a kid, learning how to annoy authority figures like Ranger Smith was a good lesson for me while growing up. He’s not all that bad, just a little wisecrack-y. My mother clearly emphasized that Yogi is not to be followed as a role model for he is a thief stealing picnic baskets, but still let me watch. Yogi’s best bud, Boo-boo, functions like a conscience, only to be ignored or disregarded.

Years later a family friend who worked for Hanna-Barbera gave us some of the colored acetate cels they used in animation, there I found out that Yogi was animated often with his head spearate from his body to save costs! 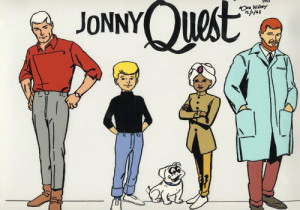 Ahh, good ole Jonny Quest. The comics on TV, as we called back then. There was hell to pay if we missed one episode. The guy to be wasn’t Jonny, but Race. Everyone back then wanted to be Race Bannon, or grow up to be him. It was the first exposure for most of us kids about Egypt, the Amazon, the Himalayas and other exotic places. Good and Evil are explicitly demarcated in this series, leaving no ambiguity for our young minds. And Bandit, where do you find a dog like him? Fighting through hordes of robots, aerial battles and skydiving, guns and gadgets, Jonny Quest satisfies any hot-blooded kid’s thirst for action. 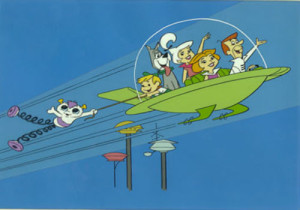 Zooming around in a floating bike-like contraption (“Hey, I thought only Michael J. Fox had that!”), the Jetsons was the first show to make my mind wonder about the intricacies of aerial traffic (“Dad, who goes first at the green light?”). It also showed some of the hardships of corporate life, albeit in a simplified and humorous way. But sometimes you just wanna zap the boss with a death ray. Besides that, where else can you get the miniaturization of nearly all things, including your vehicle? Their gadgets alone might fill up the Christmas list for Santa. Now, only if Rosie was real, cleaning would be a breeze.

This was the reason I used to kick cats as a toddler back then. Tom was so bad to try and hurt poor, cute Jerry that I laughed and praised karma when Tom got what he deserved. This series entails the hardships of Tom the cat trying to catch Jerry the mouse. In between the help of Spike the bulldog and the allure of Toodles Galore, Tom and Jerry delivers painful slapstick comedy for the young at heart. In my young mind, having a blood splatter was for the cartoons until I saw otherwise. From cartoonish depictions of violence to setting aside differences to team up and achieve a common goal, this duo shined in many different ways. Let’s make a bet: you might not know Hanna-Barbera, but you definitely know Scoob and Shaggy. The terrified duo, together with the rest of the Mystery,Inc. gang, dominated pretty much of the cartoon memories of kids back then. Less punching and shooting, more running and figuring things out. Just what momma ordered. The only objectionable thing was Scoob and Shag’s enormous appetite, until allegations of Shaggy smoking something illegal came along. This was one of Hanna-Barbera’s most successful works, spanning nearly half a century of products, promotions and merchandise. And who can forget the Mystery Machine? Sometimes a Scooby-snack is just what you need. 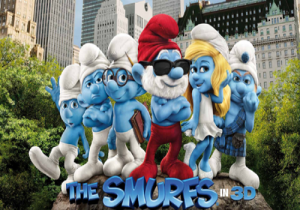 The blue guys that crawl under your bed. Nope, they’re not the boogeyman. The Smurfs are your ever-loving, adventure-seeking little friends who lives under mushrooms. You can’t be lonely, not with 99 Smurfs to choose from. Having more than a hundred members, helping one another on the journey is the main theme of this flick. That and having fun while doing so. This series was so popular on both sides of the Atlantic that in 2005, UNICEF enlisted their help for their “Child Soldier Rehabilitation” campaign. That made Papa Smurf very happy. And they had an awesome CG animated movie as well, be sure to watch it! Well then, as they say, let’s get to smurfing! 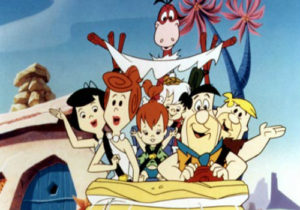 In those days, overdosing on vitamins wasn’t a big deal, except for my mom. She freaked out when I emptied a jar of Flintstones vitamins in a single day. Those were tasty and cute; I often played with them before eating them. And who can forget their catchy tune? The Flinstones show a family in the Stone Age where they have cars in the 4-feetpower range, watch TV and movies and play fetch with dinosaurs. So much animal labor was depicted in this series I wonder why PETA didn’t raise a ruckus. They probably didn’t exist back then. What I didn’t knew back then was Fred and Wilma (and Barney too) were smokers before Pebbles’ birth. They were depicted in full animation glory lighting up tobacco. Well, the Flintstones was pitched to the adults way before it became a kid’s show. The most awesome part of the show is having a big-ass brontosaurus under control of your fingertips. That, my dear friends, is PAWWAAH!!