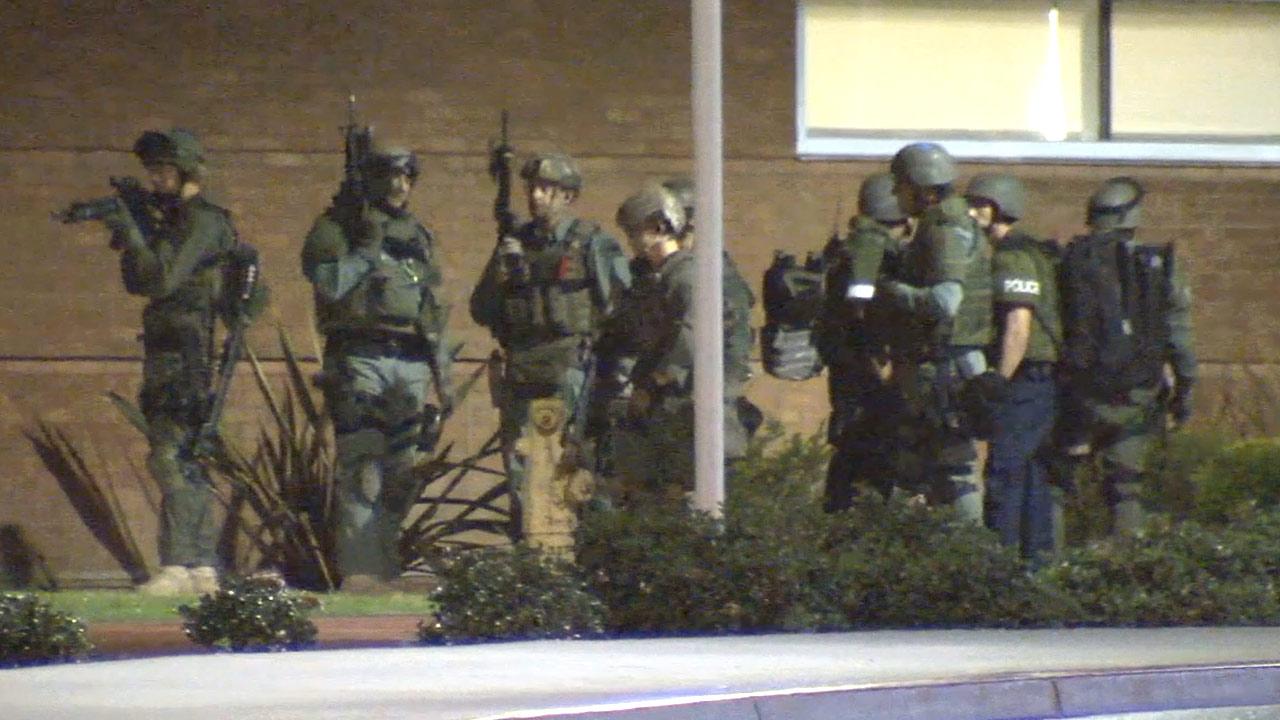 10 worst school shootings happened in US

We often think of schools as havens for children of all ages, including adults. The word “school” came from the Greek word skho-le, meaning “leisure”. However, the use of the word ‘leisure’ here does not simply indicate a pleasure time or time for enjoyment. It talks about enjoying a pleasurable time for the purpose of learning. And when we go back to ancient Greece, it shows that only those belonging to the privileged class are the ones who get to enjoy the leisure to learn. To reiterate, parents would normally do all they can to send their children to school so as to get the basic and additional knowledge essential in life. So basically, we can see the picture here that schools should be peaceful. Unfortunately, there are bunches of reports about school shootings and this is really a serious problem, let alone freakish nowadays. What’s so disturbing about these reports is that the perpetrator is usually a student or a youth. Just what seems to trigger such actions? Some of these youths were evidently victims of bullying, discrimination, and injustices, while there are a few isolated cases of diagnosed mental illnesses. Everyday attacks and insults from other school or classmates enrage such ones thus resulted to the outburst. It simply shows that as time passes by, everyday distresses increase. Listed below are the top ten worst school shootings that happened in the US history.

The massacre happened in the lecture Hall of Northern Illinois University on Thursday, February 14, 2008 at 3:06 p.m. The gunman who was identified as Steven Kazmierczak, 27, was wearing a jeans and a t-shirt. He was carrying several weapons with him. It was reported that four died, including the shooter, in the hall where the shooting happened, while two died in the hospital. All in all, the police recovered 48 bullet casings and 6 shotgun shells. As to the motive of the killer, it was not determined. He was said to be a student of that same school asking up graduate sociology. But some have observed that he was acting “erratically” probably because he stopped taking his medications. 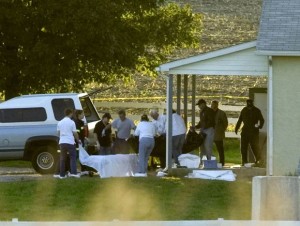 On October 2, 2006, an unforgettable incident happened. Charles Carl Roberts IV, a milk truck driver who was delivering milk to the local community shot five school girls, between the ages of 6-13, and then himself. It was reported that 9 years prior to this shooting, Charles’ daughter died after just living for 20 minutes. This struck him so much that it made him get angry at God. He was even heard saying: “I’m angry at God and I need to punish some Christian girls to get even with him.” This staged the plot. He had with him ten girls, tied their hands and afterwards started shooting them. 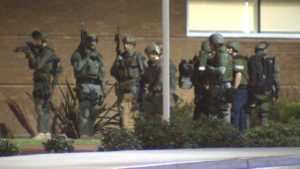 It happened on Wednesday, July 12, 1976, in the California State University, Fullerton. The shooter who was identified as Edward Charles Allaway, 37, killed seven people in the basement of the school library. He was said to have been working there as a library custodian. It was found out that Allaway was diagnosed to have a paranoid schizophrenia. What provoked him though was that pornographic movies were being played by library staff members before opening the library. Before then, he was thinking that pornographers were forcing his wife to stage those movies. These thoughts, along with what’s happening in the library enraged him so much that resulted in the killings of those people. 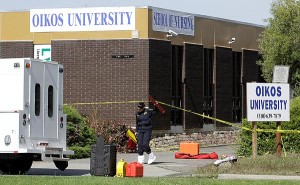 The incident happened in Oikos University, a Korean Christian school in Oakland, California on April 2, 2012. The killer was identified by the name One L. Goh, 43 years old. Upon digging his background, it was found that he was a dropped out student who complained about the cheating that was happening. Despite having dropped out, Goh did not receive his tuition refund of $6,000. This angered him so much that on the said date of the killing, he appeared in the school, apparently looking for Wonja Kim, Oikos’ assistant director of nursing then, but to no avail not until it was reported that he had been firing his gun.  He is currently at Napa Hospital, having his treatment for paranoid schizophrenia.

On March 21, 2005, around 2:50 p.m., a shooting spree happened in Red Lake Senior High School where Jeffrey Weise, 16, shot seven people, apart from his grandfather and his grandfather’s girlfriend whom he had killed on that same day. The motives of his actions were his depression and the experience of being bullied. It was reported that Weise was seen smiling as he waved the gun he was holding. He exchanged gun shots with police officers until he was hit in the right arm and abdomen. He then went to a vacant classroom where he committed suicide. The weapons that he used were his grandfather’s, which he took right after he shot him. 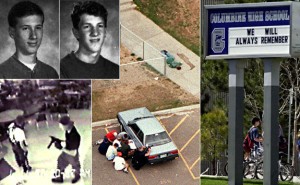 The perpetrators Eric Harris, 18, and Dylan Klebold, 17, whom were dressed in trench coats started shooting the students of Columbine High School in Denver. It happened on April 20, 1999 around 11:20 a.m. Investigators found out that these two teenagers were originally planning to detonate their school. At 11:10 a.m., these two went to the cafeteria where they left two duffel bags containing 20-pound propane bomb. But since the detonation failed, they decided instead to shot fellow students. There were speculations that these two were bullied because of being members of Trenchcoat Mafia. After shooting all of their victims, they killed themselves. 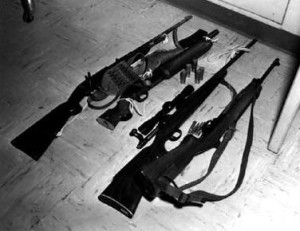 Charles Whitman, 25, an architectural engineering major and ex-Marine shot dead 13 people including his mother and his wife on the same date- August 1, 1966. He climbed to the top of the University of Texas Tower where he aimed his gun as he eyed all of the people. He was said to be firing at these people randomly. Prior to this incident, Whitman had a remarkable background. He was known to be polite and very smart. What probably led to his actions were his frustrations. In 1963, he started documenting everything that happened in his life, including his failings and frustrations. He was shot dead by an Austin police officer. 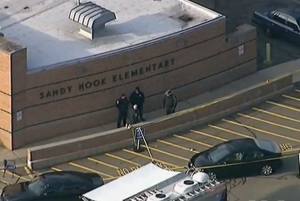 On December 14, 2012, Adam Lanza, 20, shot 28 people, including him. The mass killing happened in Sandy Hook Elementary School at around 9:35-9:40 a.m. Prior to Lanza’s attack to the school, he killed his mother at their house. And the rifle that he used was reported to be owned by his mother. This incident was not seen to be coming by the people around Connecticut since the school has just upgraded their security protocols. Among those who were shot dead in the school were twenty children, from ages 6-7, and six adults. The motive of the killing was not determined, although the perpetrator’s father said that his son was diagnosed with Asperger syndrome, and could probably suffer from undiagnosed psychopathy. 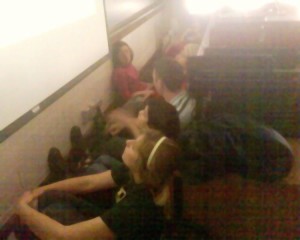 The shooting that happened in Virginia Tech on April 16, 2007, was considered to be the deadliest in U.S. history. The gunman was identified as Seung-Hui Cho, 23. He was a senior student studying at Virginia Tech, majoring in English. He was born in South Korea, and later on received his American citizenship. The shooting happened in two buildings- first in Ambler Johnston Hall and next in Norris Hall, both found within the campus of Virginia Polytechnic Institute and State University in Blacksburg, Virginia. All in all, Cho killed 33 people: five faculty staff, twenty seven students, and himself. This was the worst shooting ever since it was done by just a single gunman. After the killings, investigators found out that Cho suffered a depression. 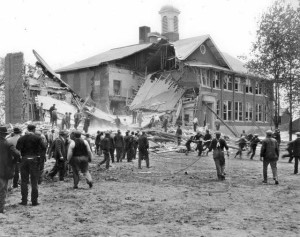 The disaster happened on May 18, 1927 at Bath Township, Clinton County in Michigan. The perpetrator was identified as Andrew Kehoe. When investigated upon, it turned out that his motive in this bombing was to seek revenge for not being elected in the locality. Adding up to that was his stress over his finances, not to mention the taxes that he has to pay. When residents were asked about his behaviors, they described Kehoe as stubborn and impatient. Around 8:45 a.m., the bomb that Kehoe set in his house and in the basement of the north wing of the school detonated. A total of 45 people were killed, including Kehoe and his wife, and 58 people were reportedly injured during the bombing.