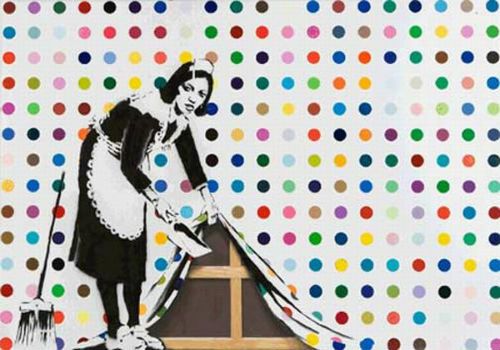 THE TEN MOST EXPENSIVE BANKSY ARTWORKS

Banksy is best known as a graffiti artist based in the United Kingdom. His works are the symbolism of his beliefs as an activist, an art about belief and sometimes freedom. Aside from being an artist, he is also a film director. He is based in UK but his works can be seen in bridges, walls, and streets all around the world. Though his work is considered as vandalism, most of his finished graffiti are not removed, due to its meaning and symbolic connection. Until now, Banksy remains to be unknown, and nobody could exactly say who he really is, what his real name is, where he was born, and what his history is. Read on, and find out more about Banksy and his most expensive works in the art world 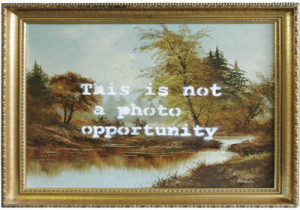 In 2008, Banksy decided to auction some of his works; proceeds go to the RED charity. One of his works that were auctioned that year was the Ruined Landscape. The work is a picture of an English landscape which was tagged with the words “This is not a photo opportunity”. It was sold amounting to a total of $385,000. The painting looked so classic and chic, but was ruined and styled with the tagline. 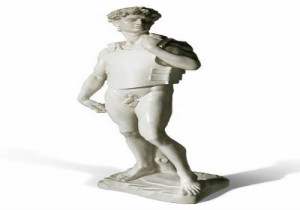 Like various artists, Banksy makes his creation through the inspiration of his predecessors. One of his works that was sold in Sotheby’s on year 2007 was his sculpture of David. Yes, David as in the David of Michelangelo. The only difference is that it is wearing a bomb disposal jacket or a bulletproof jacket. It was sold for $416,742. Later on, Banksy then made other versions of the same Michelangelo statue. There was one found in year 2009, and it was the same Michelangelo statue, the only difference is that it was wearing a suicide bombers jacket, and a scarf around his face. 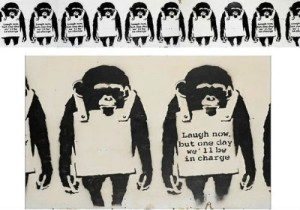 Banksy was commissioned by the Brighton nightclub to create a mural for the Ocean Rooms. “Laugh Now” was a portrait of monkeys, appearing to be wearing sandwich boards, with several monkeys having the words “Laugh now, but one we’ll be in charge” written in their sandwich board. The mural was six meters long, covering the whole wall. It was auctioned on 2008 at the Bonham Urban Art auction for $ 449,349. 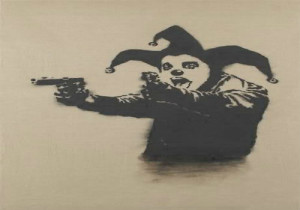 If you have a fear of clowns, then this painting is not for you. This would scare you to the bones if you were to even have a little peek of it. “Insane Clown” is a portrait of a clown, wearing what seems to be a leather jacket, holding two guns in both hands. The artwork was placed in a large canvas, and spray-painted over a stencil. Created by Banksy on 2001, it was then auctioned on 2008, at Phillips de Pury Contemporary Art Evening Auction held in London. 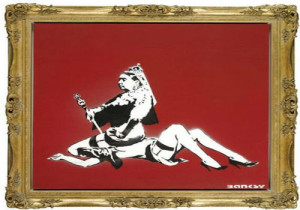 This painting was dubbed by most as very scandalous. The portrait shows the image of a very sadistic lesbian looking Queen Victoria holding her scepter, and sitting on top of woman’s head, looking as if she was straddling her. Queen Victoria is known to have passed the bill about anti-homosexual laws, saying that women can’t be gays. It was sold for about $478,095 on 2008 at the Sotheby’s in London. Some of its versions was also sold, one version was bought by singer Christina Aguilera for £25,000. 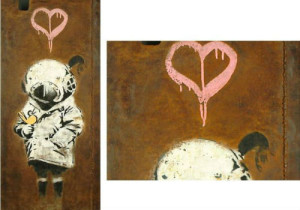 It was created by Banksy on 2003 when he was commissioned by the band Blur to make a cover for their album. The work is portrait of a little girl wearing a parka jacket, and an old diving helmet, holding a yellow bird in his right hand, a pink heart was atop the little girl’s head. It was auctioned in London on 2007, and was sold for $575,813. 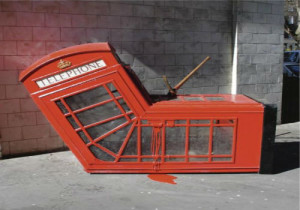 Artistic and really a vintage looking painting, the Vandalised Phone Booth was created by Banksy in 2005, being one of the most popular creations of Banksy. The artwork is a portrait of a red phone box positioned like a human being on a semi-sitting position, who was in pain, and bleeding as it was stabbed by an ax. It was sold in New York on 2008 for $605,000. This phone box is one of the many other different phone boxes made by Banksy featuring different kinds of distress or pain. 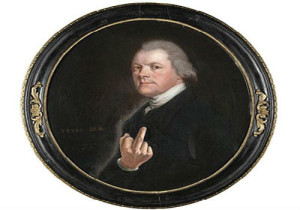 Banksy has a nack for corrupting, distorting or improvising various paintings that have been done by various famous artists. He makes a copy of this artist’s work, and puts his own twists in his finished output. Samples of this would include, Michelangelo’s “David”, the face of “Queen Victoria”, and a painting of an English man. In “The Rude Lord”, the art shows the painting of Thomas Beach of an English Lord, Banksy put on his own twists, and added a hand which was made by the Lord in the picture, raising his middle finger. It was sold for $658,025 on 2007 at London.

This painting was created by Banksy on 2000, and is painted on five pieces of canvas, each canvas telling a story of a chimpanzee undergoing an intelligence testing. The portrait shows how the chimp has opened each safe to find its bananas, and then went on to stack all the safes on top of each other to reach the vent in the ceiling and escape. This broke the record of the price of The Rude Lord painting which was sold for $658,025. Simple Intelligence Testing was sold during an auction in London, amounting to $1,265,120. 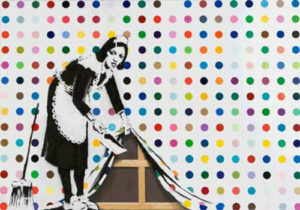 After Simple Intelligence Testing was sold for a million dollars and more, everyone thought that it would be the most expensive Banksy painting to be sold. It was an original painting by Damien Hirst, and was altered by Banksy, the face being changed to a hotel maid that was looking as if she was opening Hirst’s piece to expose a little part of what seems to be a framed window. The painting was sold on 2008 during the charity auction in New York for a price of $1.87 million. This remains to be the top, most expensive Banksy painting ever sold to date.